Adam was originally booked on a later flight home than I was so he could get more work done, if needed on Friday, but he managed to get all his work done at the archives on Thursday.  So he decided to accompany me to the airport to see if he could get on my earlier flight.  He also suggested we start the day with a run in Central Park.  This turned out to be a fabulous idea!

We left the hotel at 7am and made our way to the park.  Eventually, we found ourselves on the Bridal Path, which gave us breath taking vistas of the reservoir, framed by trees full of pink blossoms.  I think the best part was that neither of us seemed to be allergic to those trees, which were dropping pink petals all over the place! 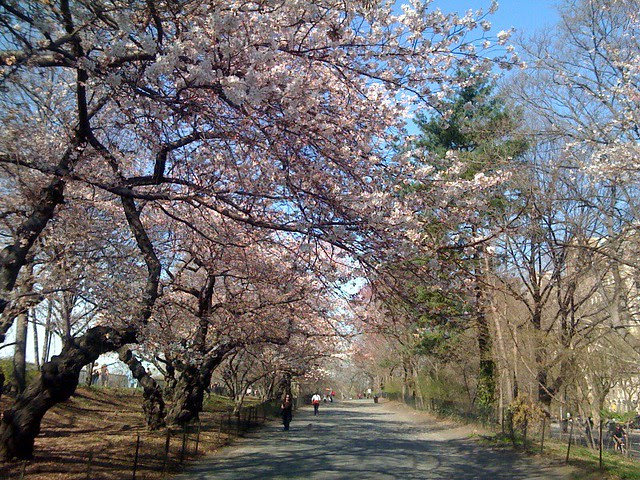 After our run, we went back to the hotel, showered, ate breakfast, and packed up.  We took a cab to La Guardia, and discovered not only could Adam get a seat on my plane, but we could BOTH get one on the flight leaving an hour before mine!  Yes please!!  Of course, this flight was delayed, but we still ended up leaving about 5 minutes earlier than my original flight.

Believe it or not, my 'fitness' caused a ruckus both on the flight to and from New York.  At Pearson, I was told to go through the full body scanner.  Great, love all that radiation!  It beeped and I was ordered to stop for a pat down.  The image on the screen was all lit up around my mid section.  I thought this meant I had some sort of metal IN me and was stressed.  Did I swallow a coin and not notice?  Did someone implant a microchip in my stomach or another internal organ?  Like WTF?

On the way home, the same thing happened at La Guardia, only this time when I made the scanner beep, the guard made me do it a second time (great, even more radiation!) and then he asked me if I workout.  Um, yeah, so?  Apparently my ab muscles are so strong and defined that they were making it look like I had something hidden and strapped to my middle (like I might be trying to smuggle something).  How freakin' weird is that?  Frankly, after all the eating we did, I'm surprised it didn't look I had a spare tire sitting around my waist, or an inflated inner tube.  Anyways...

On the plane, I managed to catch 2/3 of a movie called Parental Guidance. 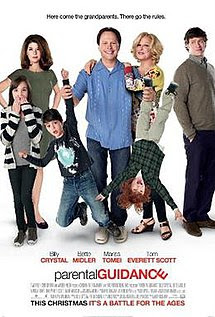 I had never heard of it, which is usually a bad sign, but with a cast that includes Billy Crystal, Bette Midler and Marisa Tomei, I thought it couldn't be that bad.  It was pretty silly, but there were a few scenes (particularly a bathroom scene with Billy Crystal) that had me laughing so loud Adam was elbowing me to be more quiet.  It's too bad I didn't see the end, but I can't complain about a short flight, I still hate flying!

The girls had a great time with my in-laws and I doubt they missed us much.  Oh well, after all the single parenting I've done recently, I really needed a little getaway, and this trip was really amazing.

If you have never been to New York, GO GO GO!!! It really is the most amazing city in the world (okay, I'll admit there are many hundreds of cities I've never seen before...).

Happy 7th birthday to Big A today!  I can't believe I have a 7-year-old.  The big party for her and Little A is tomorrow.  Oy!  If I am still standing, I'll fill you in on the details next week.
Posted by Healthy Life Lessons at 4:40 AM