Why I Won't Be Giving Away Tickets to See Jillian Michaels 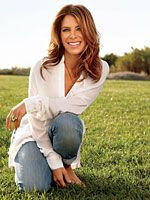 I get a lot of offers from PR companies to promote products and events on this blog.  I turn down most.  They have to fit in with my values and beliefs, and offer something to either myself and/or my readers.  Recently I was offered 2 tickets to Jillian Michaels' talk in Toronto, which is part of her Maximize Your Life tour, if I would promote the event.  I declined.

Although I realize some readers might be really interested in winning these tickets, I felt it would be hypocritical since I do not agree with a lot of the messages Michaels sends to her audience and fans.

Now, I reviewed one of her fitness videos a few years back, and was very impressed.  While she may have some good fitness DVDs out on the market, however, I do not watch the Biggest Loser.  I tried, and felt sick after a few minutes.  I have no time for this type of garbage reality tv that involves publicly humiliating people.  Furthermore, there is some evidence that watching this show can have a detrimental impact on viewers, particularly children.

After reading an article about Michaels recently, I am even less of a fan.  Big A's school had a fundraiser where you buy a magazine subscription and some of the money goes to the school.  I hate fashion magazines, avoid the fitness magazines like Shape and Self, and already get the 2 Canadian lifestyle magazines I enjoy: Chatelaine and Canadian Living.  This left me few options, so I chose Health magazine.  I assumed it would be less focused on appearances than the fitness magazines, but I am so far not very impressed.

In the March 2013 issue, Michaels is on the cover.  Before I get to her feature article, however, I'll mention the other one that really ticked me off, titled, "Wine or Your Waistline?" It discusses how alcohol can lead to weight gain or prevent you from losing weight.  While this is an important issues, nowhere in this entire article is it mentioned that alcohol consumption also comes along with other serious potential health risks like cancer!  I know the focus is on weight, but really I think this is a big omission.

The article on Michaels starts by quoted her mantra, which they describe as an "encouraging phrase": "Unless you faint, puke or die, keep walking!"

Um, and how exactly is that motivating?  No wonder watching Biggest Loser has deleterious effects on viewers!  To me, this simply promotes the idea that being healthy involves extreme suffering and deprivation.  Yeah, way to get people to jump on the healthy living bandwagon!

That being said, she does say in the article that no one should use extreme measures to lose weight, you should eat healthy 80% of the time, and practice positive affirmation, however, this all seems to clash with her approach on Biggest Loser.  So I guess my problem with Michaels is her affiliation with the show.  It seems that even she knows that the measures taken on the show are not particularly healthy, which makes her a bit of a hypocrite.  So sorry readers, as much as I know many of you would love to see Michaels speak, I felt that promoting her tour would have made me a hypocrite too.

I'm on a blogging break until May 6th, so until then stay healthy!

Posted by Healthy Life Lessons at 7:48 AM