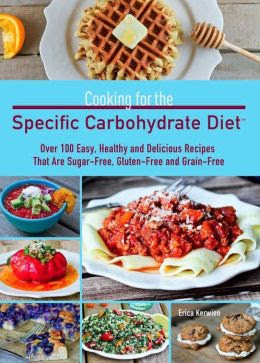 Recently I was asked to review this book.  I had never heard of the Specific Carbohydrate Diet, so I was intrigued, and, to be honest, a little suspicious.  Maybe it's because I'd never heard of it, or perhaps because I freakin' love carbs so I'm never enthusiastic about low-carb diets or any diet that eliminates a whole food group.

The book provides very little detail about the scientific basis for this diet except that it was originally developed by a physician in New York named, Sidney Haas for his celiac patients.    In 1955 Elaine Gottschall wrote a book about the diet after it reportedly cured her daughter's ulcerative colitis.  The author, Erica Kerwien, recommends picking up Gottaschall's book to get some explanation of the science behind it.

This is not meant to be a weight-loss diet, but is apparently intended to help individuals suffering from a number of chronic illnesses including Crohn's disease, ulcerative colitis, celiac disease, cystic fibrosis, diverticuliis, IBS and various food intolerances.

The diet is called Specific Carbohydrate Diet because it permits certain carbs while eliminating others.

Forbidden foods include:
- Smoked and/or processed fish and meats
- Starchy vegetables
- Grains
- All other legumes not listed above including chickpeas
- Sugar, maple syrup, xylitol, stevia and all other sweeteners

I checked out Elaine Gottchall's work but frankly wasn't so impressed by the research it's based on.  All the published work citing this diet's effectiveness for curing illness is based on case studies.  There are no large-scale controlled, scientific studies.

I suppose if you are suffering from one of the chronic illnesses that this diet is supposed to help heal and nothing else has worked, there is no harm in trying this (with your doctor's approval!).  There is no reason to think eating this way will help you live longer or lose weight.  Personally, I can't fathom living without grains.  Just thinking about giving up oatmeal and rice makes me depressed.  And chickpeas?  I freakin' love chickpeas!  I'd have to be in some serious pain to try this diet, but I guess that's the point.

In terms of the recipes, some are quite interesting and all are based on natural, whole foods.  They also probably fit into the 'Paleo' diet which is so popular right now.  For example, almond flour and coconut flour replaces wheat flour in a lot of recipes.

Aside from shirataki and kelp noodles, I have yet to find a carb imposter that satisfies me, however, her recipes using grated cauliflower in place of rice look so good I may just have to try them.

The book covers everything from making your own yogurt, nut milks and creams, nut flours and butters and broths, to snacks, salads and soups, sauces, jams and dips, baked goods, veggies, poultry, meat and food, and desserts.  There are a fair number of colour photos, and simple, easy to follow instructions.  Kerwien provides staple ingredients to stock in your kitchen as well as a list of ingredient substitutions at the back of the book.

While this diet is not for me, this book does have some lovely, healthy recipes that may appeal to you if you are looking for a potential solution to a chronic health problem, or are following a low-carb, or Paleo-type diet.