I love grains.  Obviously.  I could never be on any diet that doesn't permit them.  I would literally go nuts.  I thought I was aware of most existing grains, even the more exotic ones, but I recently discovered a new one: Freekeh!  Okay, I guess it's not a new grain, as it is wheat, but it's young wheat that is dried and roasted.

Here's some info about it:

Freekeh (Pronounced Free – ka) has been appearing in recipes from as early as the 13th Century. It is a grain based food that is made from green wheat that has been dried, roasted and then “thrashed” or “rubbed” to make the flavour, texture and colour uniform. The result is an earthy, smoky grain that has a distinct flavour.  Freekeh is a delicious side dish and a great alternative to rice and other grains. Freekeh has up to four times the fibre of brown rice and provides more protein than mature wheat and most other grains. It is also a source of both prebiotics and probiotics and contains iron, zinc, potassium and calcium. Freekeh is also a low glycemic index food (Source).

I always love discovering new things, so I picked some up and used them in one of my go-to recipes instead of rice (I'll share it tomorrow). 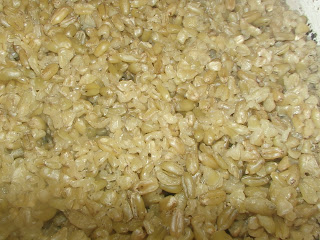 It cooks up similar to rice and looks, to me, like a green-tinged cross between brown rice and barley.  It's got a nutty flavour and chewy flavour that I really enjoyed.  I think I'll be making it again!