I had an epiphany recently: I am an imperfect parent, I do many things wrong...but that doesn't make me a 'bad' parent, and just possibly I'm a good parent.

One of the things that bothers me most is how much like my own parents I am in certain ways: impatient, distracted, task-oriented and very career-focused.  I remember always promising myself that I would be a more 'fun' parent than my own were.  But frankly, I don't think I'm always so fun.  In fact, I believe the girls both consider Adam to be the fun parent.  I think I've made a lot of improvements in this area through my efforts to manage my anxiety and stress, but I probably still have a ways to go.

A lot of things necessary for effective parenting besides patience,  also don't come naturally to me.  Like discipline and not personalizing defiance and conflict.  I really have to work on this stuff, which seems to come so easily for others.

Nevertheless, I have realized that there are at least a few things, I think, as a parent, that I am doing right.

My epiphany occurred because of a few recent events.  First, on the way to school/daycare a few weeks ago, Little A was shrieking as if I'd just pulled off her toenails with plyers.  Why?  Because I was in the middle of a conversation with Big A and she was interrupting.  I told her to allow me to finish my conversation with Big A and then I would be happy to address her.  She was not satisfied with this, and insisted she had to talk to me right away.  Then she started screaming.  As we approached the school, one of their daycare teachers passed us and asked Little A what was wrong.  I explained the situation.  She looked and me and shook her head and said, "Wow, I don't know how you do it, I always see you trying to manage them in the hallway and you always look so calm!"  Ha ha!  Calm?  I couldn't believe it!  Most of the time I feel like I'm about to do this:

But it struck me: even when I'm feeling anxious and out-of-control on the inside, I'm actually keeping it together most of the time.  Admittedly, I do raise my voice on occasion.  But I also manage NOT to react a lot of the time too.  And that's something, right?

I grew up in a home where yelling was the norm.  I mean ALL THE TIME.  My parents at us, and at each other.  And by the way, excessive parental conflict is extremely damaging for children.  In fact, if a child feels unsafe, it can be considered child abuse these days.  When I told my parents this fact recently they were floored.  "We just thought it was better to get everything out in the open", my dad said.  While there may be a genetic component to my anxiety issues, I can guarantee you that having explosive parents also contributed.

I am very proud to say that Adam and I never fight in front of the girls.  Actually we don't fight much period.  But aside from snapping here and there, and only occasionally, we never fight in front of them.  I know the girls feel safe and comfortable at home with us and trust that they are in a stable family.  Any time I complain that they are much less well behaved with Adam and I than anyone else, I am told that this is likely because they feel so much security with us.  A double-edged sword for us, I suppose, but definitely good for them.

Adam and I also never discuss our financial concerns in front of the children, something my mother did incessantly, which only added to my anxiety and feelings of insecurity as a kid.  We are careful to try and teach the girls about the value of money, but we would never want them to feel worried about our financial situation.

The other thing that happened recently, is my mom brought a bag of old pictures and writing of mine from when I was a kid that she found in their house.  There was a note pad I had turned into a book which featured two best girl friends as the central characters.  Each page details some aspect of these characters and their lives.  As I flipped through it, I was increasingly disturbed.  I describe one of them as thin and the other as fat.  I even list their heights and weights. Throughout the book, it is the thin girl who has the nicer clothes and house and gets the better marks.  I was only a few years older than Big A when I made this book.  As upsetting as it was to see this association with thin = good in me from such a young age, I wasn't surprised.  I was aware of my mother dieting from the time I was very small.  In fact, I remember telling her I was going to diet with her when I was 5.  My grandma Ruth also monitered my food intake from day one, and frequently warned me not to get fat.  She often criticized my mother's weight in my presence and my mother turned around and began to warn me about getting fat as soon as I hit puberty.

So there's something else I'm doing right: I NEVER EVER EVER talk about my weight or body shape in front of the girls, nor do I discuss food in the context of weight, nor do I comment on ANYBODY'S weight or shape in front of them.  They're both young right now, but neither of them ever talk about weight.  Big A, who is heavier than most of her friends (and taller too), is not the least bit self-conscious or self-critical, nor does she even seem to be aware of this.  I know this may all change as she gets older.  But I know I am doing everything I can do to make sure my girls love themselves and don't judge themselves or others for how they look or how much they weigh.  And you know what?  That's another thing I'm doing right!

I'm not saying I am not going to continue striving to be a better parent and to work on my weak areas, but I am going to try and stop focusing ONLY on my weak areas and try to acknowledge some of my strengths.  Heck, I need to be in a positive headspace over the next few months, because Adam is going to be away for a few lengthy work trips.  In particular, he is going to be away for 17 days in February, which will be the longest period of time I will be a lone parent to date.  Gulp! 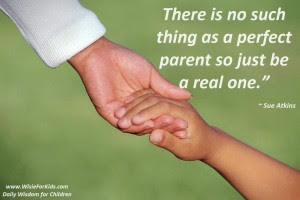