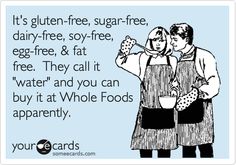 Toronto feels like a sauna/steam room right now.  Gross! While others frolicked in the weekend heat and humidity, I hid indoors.  Yesterday I took the kids to see Finding Dory.  It was cute, but I kinda miss seeing adult movies.  I've probably seen a half dozen or less in the 10 years since we became parents.  The heat is supposed to break tomorrow, thank goodness, but today is going to be horrid.

Just so I don't receive any death threats over this post, let me start by saying I am well aware of the fact that many people suffer from life threatening allergies to various foods, including gluten, wheat and dairy products.  I am also well aware that people with Celiac disease cannot eat any gluten without dire consequences.  Others suffer from lactose intolerance, which I know all to well since, until my pregnancy with Little A, I had it myself.  Eating more than just a very small amount of dairy would give me extreme gas, bloating and stomach pain.  Now, for whatever reason, I have no problem with dairy at all.

But the point I want to make here is that just because some people cannot eat these things for legitimate health reasons, does not mean they are inherently unhealthy foods for everyone.  Unfortunately, it seems that these dietary items are suddenly being treated like villains for just about every health issue under the sun! I wouldn't be surprised if someone arrived at an ER with a gunshot wound, only to be told to just eliminate gluten, wheat and dairy from their diet as a 'cure'. Its ridiculous! Furthermore, anyone with any sort of digestive concern gets tested for food intolerances and seemingly EVERYONE comes back as intolerant to a zillion things, even though they may feel just fine when they eat them.

I have followed all the research on this (I mean the credible research!), and there is not any evidence that these foods cause illness in most people.  In addition, those food sensitivity tests have not been proven to be actually measuring anything relevant.  There isn't clear evidence that is even such a thing as a food sensitivity.

Do some foods not agree with certain people? Sure, of course!  I am now living proof of that.

The reason I'm bringing all this up is my own recent experience with tummy troubles. I had been getting increasing bloating and abdominal pain for months now. I thought perhaps it was connected to hormones throughout my monthly cycle, or stress, even though it was happening when I didn't feel stressed or anxious.   None of that seemed to really explain it so I finally had to admit it must be something I was eating. I already knew it wasn't the big evils (gluten, wheat or dairy), because I'd been paying attention and none of that gave me any trouble.

I began playing around with my diet and trying different things but it still wasn't obvious until I finally had a lightbulb moment: it was flaxseed! I throw flaxseed in lots of things and had actually been increasingly using it because of all its health benefits, which is why I didn't initially put it all together (my morning oatmeal, lots of baked goods, as a binder for meatballs, etc.).  A clear pattern emerged and I then knew what to try eliminating.

So was I right? Oh my, yes, what a difference! I now bake with chia instead of flax and don't add flax to anything I make (whole flax seeds don't bother me because they pass right through).  I think the flax meal was clogging up my plumbing.  This makes sense in a way, its really gummy. That's why it is used as an egg replacement: to bind things together!  But I don't want my colon binded up thanks!

Since eliminating flax meal, I feel back to normal, thank goodness!!

Now, because flaxmeal makes me feel crappy, does that mean it is an unhealthy food and everyone should stop eating it? No! And I seriously doubt anyone would make that claim.

So if you feel good when you eat wheat, gluten and dairy, and you have no medical reasons to avoid them, or any other food group, then go for it! The key with nutrition is to eat real, unprocessed food, regardless of what it's free of (i.e. a gluten-free, vegan cupcake is still a cupcake!).