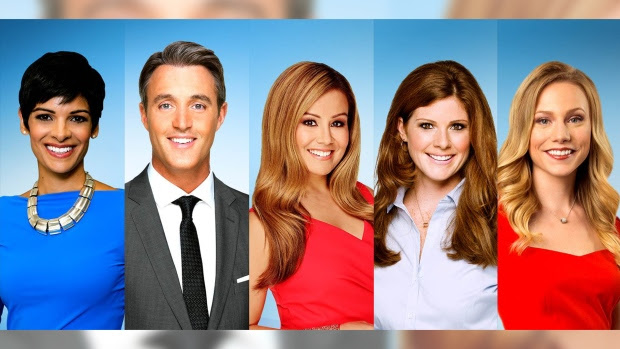 Though I'm excited to start this beautiful day and welcome the weekend, I feel like ranting.  Yep, I'm still going on about the loss of my favorite morning show, Canada AM.

They've announced the new show that will replace it: Your Morning.

One of the hosts will be Anne-Marie Mediwake, a seasoned journalist, along with Ben Mulroney, who has years of experience as an entertainment journalist (!).  I actually really like Ben Mulroney. He's bright and seems quite down to earth (for the son of a former prime minister).  But my greatest fear for my morning television viewing seems to be coming true: they are replacing Canada AM with an entertainment show! No, say it isn't so!!!!!!!!!!!!!!!!

Grelo also has a journalism background but she is one of the co-hosts of The Social, sort of like Canada's version of The View, but with a focus on social media, and, in my opinion, one of the most atrociously stupid shows out there.  At least Grelo seems to be the brightest one on that show...

I don't know much about Lindsey Deluce, though she does have an impressive education (no surprise there as Robert Deluce, CEO of Porter Airlines, is her father) and prior experience as a news anchor.  Okay, sigh of relief.

Likewise, I am previously unfamiliar with McEwen.  She is coming over from CTV Calgary where she's been working as their Meteorologist. Okay fine.

But here is what bothers me most.  Aside from the fact that apparently news is going to be sidelined in exchange for a bigger focus on entertainment (WTF, come on Canadians, we're not supposed to be into celebrity worship as much as our southern neighbours!), every one of these hosts is relatively young and very gorgeous.

Why is it we need those delivering news, weather, or even entertainment news to look a certain way (never mind be from wealthy, prominent Canadian families)?

I know that television is all visual, so this isn't anything new. But as I've ranted about before, our tech and social media obsession have turned us into complete slaves to physical beauty. Millennials can't be bothered to read words, everything has to be presented as a visual image in the form of photo of video.  I just read an article that said a recent survey of Millennials found that the most important characteristic of the food they eat is how it looks (i.e. how Instagrammable it is)!  Goodness, what is this world coming to! If we make all our life decisions including who we trust to deliver information and what to eat based on physical appearances, we're in for trouble.

I guess I may be shopping around for a new morning show soon...one that focuses on NEWS! I think I might check out Global's show while I do my early morning workouts.  On top of that, I read both the Toronto Star and Globe and Mail newspapers while I eat breakfast.  Remember newspapers? Those things you get delivered to your door, that have mostly words?

Okay, rant over, have a lovely weekend.