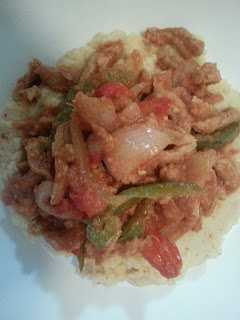 Okay, I know for sure I have a winning recipe when its vegan and Adam loves it.  That does not happen often!  As soon as we started eating this meal, he commented several times on how good it was, and wondered if the cauliflower was actually potato.  Ha!

I've been dreaming up this one in my head for a while.  BBQ is one of the big food trends here in Toronto, and being the protein lover I am, its very tempting.  The only problem is...its far from healthy! It doesn't have to be, but its mostly red meat and the sauces are generally full of sugar.  Sure, a lot of them offer pulled chicken or BBQ chicken, but the sauces are still sugary, and they are usually served with white buns and not very healthy side dishes.
So I reimagined a BBQ meal that is both vegan and low-carb.  Oh, and also sugar-free too!

Real meat provides so much unctuous flavour because of the fat and the carmelization you get when you cook it.  Because I was using a vegan meat substitute (Soy Curls, which are less processed than most), I came up with an uber flavourful sauce to compensate.  By the way, if you didn't want to use Soy Curls, you could try using jackfruit instead.

Throw everything except tomato paste into a pot or skillet and simmer over medium heat until veggies and Soy Curls are softened and most of the liquid has been absorbed.  Add tomato paste and stir.  Turn heat to low and continue cooking about 10 minutes.  Season, to taste.

Steam cauliflower until soft and then puree, along with remaining ingredients, in food processor.  Spoon onto plates and top with desired amount of pulled pork.

This recipe was shared with Urban Naturale's Plant-Based Pot Luck Party and Vegetarian Mamma's Gluten-Free Friday.
Posted by Healthy Life Lessons at 5:11 AM