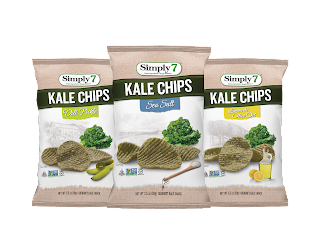 You all know I'm not much of a snack food fan.  To me, you need nothing more for a snack than fruits, veggies, cheese, nuts, etc.  Products marketed as 'snack food' tend to just be crap.

But the rest of my family does not share my opinion, and apparently nor do most North Americans.  At the very least, if you are going to consume snack foods, you should opt for the most nutritious ones you can find, and even then, its wise to watch your portion sizes.

Admittedly, when I was asked to review Simply7s new line of kale chips, I thought they were sending me kale chips.  Like baked kale leaves, like the ones I make.  I was a bit surprised to discover when they arrived, that they were, in fact, green potato chips.  I hadn't read the description carefully when I was sent the inquiry. I was disappointed, but my kids were not!  They sent us the Dill Pickle flavour, Sea Salt, and Lemon and Olive Oil flavours.

I thought the Sea salt were tasty, but they weren't Little A's favorite.  Big A, however, adored them and pretty much ate the whole bag herself.  Little A initially refused to try the Dill Pickle because she hates pickles but Big A described them as, "The best thing ever!" Eventually, Little A gave them a try and low and behold, she loved them too!  Our neighbours took the Lemon and Olive Oil flavour to sample and said they enjoyed them but found them too salty.  If they were less salty, they said they'd be 'delicious'.

Despite the fact that they are actually chips, and not kale leaves, I love that the first ingredient is kale powder, made from dehydrated curly kale.  Is this the same as eating fresh kale? I doubt it, but it is better than eating regular potato chips.

All Simply7's products are Non-GMO and gluten-free and made in Houston, Texas.  They are available across the U.S. and Canada, except the kale chips which, sadly, are not yet available in Canada.

Disclosure: We were sent complimentary bags from Simply7 but all opinions on this blog are our own.
Posted by Healthy Life Lessons at 4:39 AM