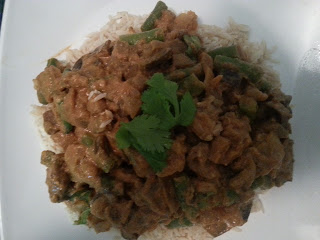 Welcome to a new week!  Here in Toronto it's starting off well with relatively mild temperatures. But I know many of you down south are experiencing a one heck of a winter storm right now, so you are probably in the mood for some comfort food.  Indian food is just that.

Indian food is absolutely scrumptious, but it often is very heavy and calorie-dense.  Although full of good-for-you spices and veggies, many dishes are also full of oil, butter and cream.  Probably one of the most popular dishes in North America, Butter Chicken, is usually just that.

We never order it when we get Indian food, not just for that reason, but also because Adam doesn't eat dairy and meat together.  I created this recipe for Adam - so, in fact, I did use chicken as vegan food makes Adam grumpy.  But the sauce is vegan and you can use chickpeas or tofu for your protein instead.

I kept the calories lower by using coconut creamer (this one) instead of cashews, which are often the vegan go-to dairy substitute.  You could also use a good, creamy almond milk though, if you prefer. The chickpea flour adds a richness to the sauce, but its optional.

Traditional Butter Chicken doesn't have veggies in it, but this version has eggplant and green beans, so even if you use meat, like I did, you can use less.  I used 4 small chicken thighs, which were about a half pound, for 4 servings.

I highly recommend preparing the eggplant the day before for best flavour.  The cider vinegar and salt remove all the bitterness.

Place diced eggplant in a large dish and cover with vinegar and salt.  Refrigerate overnight.  Drain and rinse, prior to using.

Saute eggplant, onion, garlic, ginger and spices in oil for several minutes.  Add vinegar and creamer and simmer until soft.  Stir in beans, tomato paste and chickpea flour.  If sauce is too thick, add water until it reaches desired consistency.  Simmer for 20 minutes.  Garnish with fresh cilantro, if desired.  Serve over cauliflower rice, basmati rice, quinoa, or on whole grain naan.  Refrigerate for up to 4 days or freeze.

I have shared this recipe with Urban Naturale's Healthy, Happy, Green and Natural Party Blog Hop.
Posted by Healthy Life Lessons at 5:05 AM