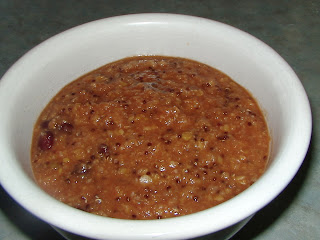 All the parents at the girls' daycare have noticed an annoying trend: foods that the kids won't touch at home, they gobble down at daycare.  Perhaps it's peer pressure, I don't know, but the kids tell us they ONLY like x, y or z the way the daycare makes it and it drives us all mad.  I don't doubt the food is good, the daycare has their own cook who makes, fresh, homemade vegetarian meals each day.  But some of the parents have tried using her recipes and their kids STILL won't eat the food at home.

Nevertheless, when the girls both came home last week and told me they like chili - as long as it's not spicy - I couldn't miss the opportunity to make something new.  Now, anytime I serve something new for the first time, it's ALWAYS a disaster.  Generally they will refuse to try it or say they hate it before they try it, or will try only a microscopic amount.  I end up furious, and Adam asks me why I even bother.  Fun stuff.

So this time, I decided to adjust my expectations and simply expect that they wouldn't touch it.  I now know that sometimes (and only sometimes), after a few tries, they end up loving something they initially claimed to have hated (like my chicken soup with kamut alphabet pasta).  This time, however, I got a nice surprise: Big A was willing to try it, AND she really liked it!  In particular, she gushed over the kidney beans, and it's been years (she ate hummus until she was about 4) since I've been able to get her to go near a legume (peanuts excluded).  Little A, however, refused to even taste it, but hey, I expected that.  I'm willing to try again until she comes around.  Admittedly, she could be leaving for university by then...

I toned down the seasoning in this chili, added a sweet element with some mango puree, and hid some white veggies (green cabbage and cauliflower), which are undetectable.  Just make sure that if your kids hate 'bits' as much as Little A does, you puree everything well.  Also, if little spots might freak them out, you might want to use white instead of red quinoa.

Set a large pot over medium heat.  Saute lentils, onion, cabbage, garlic and spices in oil for about 5 minutes.  Add mango and cauliflower and cook for another 5 minutes.  Pour in tomatoes, and water or stock.  If chili is 'chunky' at this point, use an immersion blender to get out any big 'bits' of veggies.  Add quinoa and beans.  Turn heat down to medium low and simmer quinoa is cooked and chili has thickened (at least 30 minutes).  Serves a crowd.  Freezes well.

*Frozen cauliflower is softer and easier to puree, but well cooked fresh will do too.

This recipe has been entered into Vegetarian Mamma's Gluten-Free Friday.
Posted by Healthy Life Lessons at 5:03 AM