I don't have much time to eat during the day when I am at the office and busy seeing therapy clients. I've discovered that even doing 3 hour long sessions in a row without a snack can leave me hangry.

Since I need something satisfying, portable and quick, I frequently reach for protein bars. As such, I've been trying some different ones lately just to mix things up.

On a whim (and because they were on sale on Amazon.ca), I bought some Pegan bars. 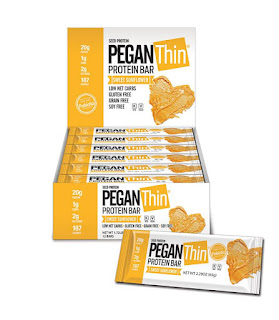 This was an unusual choice for me because I am neither paleo nor vegan and that's the whole 'thing' with these bars. Also, the only flavour available was sunflower butter which is kind of weird. They have other yummy sounding flavours though, like Ginger Snap Cookie, Cinnamon Vanilla, Cinnamon Raisin Roll and Chocolate Lava.

In any case, I have to say I like them. They taste exactly like eating sunflower butter (surprise, surprise). So if you like it, you will like these. It isn't sweet or candy bar tasting, so I didn't even bother offering one to Adam or the girls because I know they won't like them.

The ingredients are pretty impressive, as are the macros, if you are looking for a relatively healthy bar: 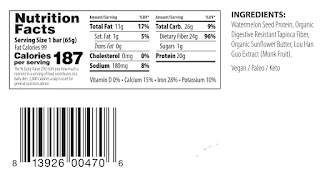 I also found a clearance sale on Quest Peanut Butter Supreme bars and decided to give them a shot. They are similarly less sweet and candy tasting compared to other flavours, but definitely yummy if you are a peanut butter lover. They are pretty firm and chewy but I prefer that to a bar that's too soft. 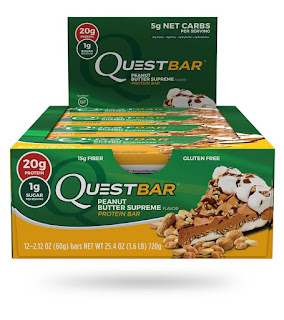 The macros and ingredients are typical for Quest bars. This particular flavour does have sucralose so if you are one of those people who gets hysterical over artificial sweeteners, than these are not for you.

So, will I buy either of them again? Nope. They still don't compare to Quest Double Chocolate Chunk, or the Costco protein bars, which are also the cheapest of any I've found. But hey, its nice to have some variety.
Posted by Healthy Life Lessons at 5:13 PM