The first thing anyone said to me who had been to Israel before about the country is, "You will love the food"!

I can't argue with that.

The traditional cuisine is all things I love: lots of fresh fruits and veggies, grilled meat and fish, hummus, tahini galore (and you know I am the tahini Queen!), dates and other dried fruits and nuts.

As I mentioned in a previous post, the breakfast buffets at the hotels (we were at Dan Panoramas in both Jerusalem and Tel Aviv) were spectacular. Here is a, probably incomplete list of what was on offer:

It was seriously amazing!

I was also impressed with the coffee at the hotel, and at the few cafes where I grabbed one. And you know how picky I am about coffee!

The best dish I had was at a restaurant in the Carmel market in Tel Aviv. It was roasted cauliflower with beet tahini sauce, raisins and pumpkin seeds (dish on the right). I definitely have to recreate this, it was fantastic! 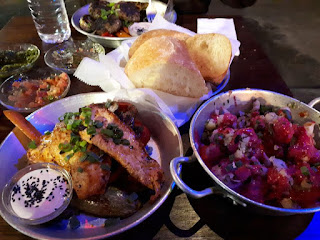 Unfortunately, the other dish I ordered, chicken and roasted veggies, was bland and dry. We had wanted a fish special they had, but they were out of it.

Roni, our guide, took us to an Arab falafel/shwarma restaurant that I thought was just okay. My favorite part about it was that you eat outside on a patio, and there were a million cats everywhere offering snuggles in exchange for food scraps (I don't care if that's not hygienic, I will take any excuse to snuggle cats!). It wasn't bad, but I found the falafel and hummus underseasoned compared to how I like it. 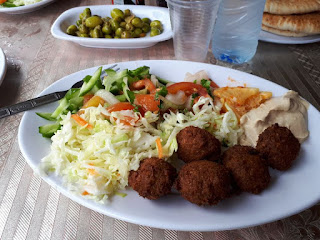 While out and about on our own, Adam and I ate at Aroma Cafes several times. It was just easier than trying to figure out restaurants with no English menu. We both got variations of this chicken salad each time. 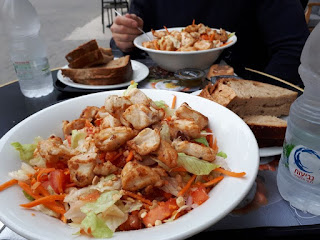 In Jerusalem, we discovered The First Station, a funky area near our hotel with shops and restaurants. We had a good meal at an Italian place, and met a lovely couple in their 80s visiting from British Columbia. We had a nice chat with them about touring Israel and life in Canada. 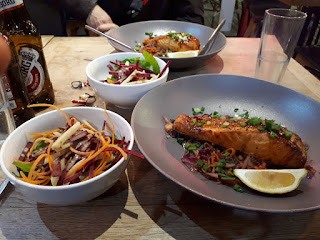 The last 2 days we had in Jerusalem were tougher because of so many things being closed for Shabbat, but we managed to find a great restaurant open called Focaccia on the Friday. On the Saturday, we found a sushi restaurant right near Focaccia and got take out to eat at the hotel before the cab came to get us to take us to the airport. It was decent, though they didn't have the meal on the menu I had originally wanted, so, in fact, I got a Thai chicken curry.

The markets in both Jerusalem and Tel Aviv were also amazing. Huge varieties of fresh fruits and vegetables were on offer, as well as vendors selling candy and chocolate (our kids would have gone nuts!), halva (in like 50 different flavours!), baklava, falafel, fresh pita/breads, dried fruits and nuts. I didn't end up buying anything there for us, but brought home chocolate, halva, and Turkish delight for relatives.

Now I do have to admit that you can definitely have too much of a good thing. By the end of the trip I was kinda sick of olives and marinated vegetables because I was eating so much (even at breakfast!). One thing I didn't get sick of is the dates. In fact, Roni was telling us about how the Israeli Medjool dates are so large and sweet, that Israelis can't eat more than one at a time. Nevermind that I was stuffing my 4th into my mouth as he said this, that I'd snatched off the hotel's breakfast buffet 😆😆

Also, a visit to Israel is not a ticket to weightloss, even though the cuisine is healthy. Its definitely not low-cal. There is a ton of olive oil and tahini used in the cooking, as well as nuts and seeds. So, yes, nutritious, but also easy to overdo.

Vegans can definitely find stuff to eat pretty easily, as long as you don't mind most of your protein coming from beans, nuts and seeds. We didn't see much tofu at restaurants or cafes, though health food stores carried lots of it, as well as a good array of tempeh and soy or wheat-gluten meat alternatives.

My one complaint, that would probably not be a concern for most people, is that it was hard to get a COLD drink. Maybe its because we were there in winter so Israelis aren't so concerned with drinking things iced cold, but that's how I like my beverages always. I found whether it was beer, water, or Diet Coke, nothing came chilled enough for my taste, and our hotels didn't have ice or water machines, which I found frustrating. Tepid tap water does not quench my thirst!

Also, tons of people smoke, and smoking is allowed on restaurant patios, so Adam and I often had to strategically seat ourselves where smoke wouldn't waft in our direction.

As for the food on El Al, the Israeli airline, it was...airplane food, maybe a bit better than average. You definitely got more food than other airlines, but I would not say it was stellar. We bought dinners to take on the plane at the airports, so it was mostly the breakfasts we ate on board. Both times we got vegetarian omelettes and they were accompanied by some sort of fruit, a bit of coleslaw, a (white) bagel and cream cheese.

Well that's all folks! The only destination I've had on my (non-existent) bucket list was Israel, and now I can cross it off. It is definitely a wonderful place to visit with lots of interesting things to do regardless of what your preferences are.
Posted by Healthy Life Lessons at 4:46 AM