It seems that Irritable Bowel (IBS) is increasingly common these days. But I've been familiar with it since I was a kid. My dad was diagnosed with it back in the 80s. At that point, nobody was talking about it. He was put on this weird fibre supplement but I don't think it helped much because after a few years he quit taking it.

By the end of highschool, I'd been diagnosed with it too. My doctor recommended I start my day with a glass of warm water and then sit on the toilet until elimination occurred. Um. Okay...

That didn't work. Partly because drinking warm water made me gag (hot with lemon or ice cold is how I like my water!), and partly because it just didn't help me eliminate. It was only years later I realized I just needed to stop consuming milk (I was lactose intolerant and ate cereal with milk every day for breakfast) and start drinking a lot more water. I was working out regularly by 10th grade, but like most young people, drinking crap (pop, juice, etc.) or nothing at all.

My IBS symptoms have always been around since, but improved or worsened depending on what's going on with my hormones and my diet.

I am now fine with dairy, as long as I don't consume too much milk (cheese is fine). But, as I reported recently, I have had to entirely cut out chia and flax seeds. I also can't overdo it on cauliflower, beets, or beans.

I am pretty bummed about the flax and chia, as they are so nutritious and a great source of Omega 3s, which are vital to overall health. Fortunately, there are some other plant-based sources, such as sea buckthorn berries.  This plant also contains Omega 7 which can ease IBS symptoms for some people. You can get a variety of supplements and beauty products made from sea buckthorn through Seabuck Wonders, an awesome company whose products I reviewed for you all a few years ago.

They have provided some info on IBS in honour of April being IBS Awareness Month:

Chicago, IL – March 23, 2017 – If you’re not personally affected by IBS (Irritable Bowel Syndrome), chances are you know someone who is. Did you know that 11% of the world population suffers from IBS?[1] In the U.S. alone, 25-45 million people are affected by this disorder—with a majority being women. And it is quite possible there are many more who suffer from IBS but have not been diagnosed.
These are staggering statistics for a condition that does not have a specific cure. As a matter of fact, if you’ve been diagnosed with IBS, it is because most other digestive diseases or conditions have been ruled out—it is a diagnosis of exclusion with many variables in terms of symptoms, treatment and severity.
What is Irritable Bowel Syndrome?

The Mayo Clinic defines IBS as ...a common disorder that affects the large intestine (colon). Irritable bowel syndrome commonly causes cramping, abdominal pain, bloating, gas, diarrhea and constipation. IBS is a chronic condition that you will need to manage long term.[2] It goes on to explain that only a small number of people have severe symptoms requiring prescribed medications, and that most sufferers can control symptoms through diet, exercise, lifestyle and reducing stress. 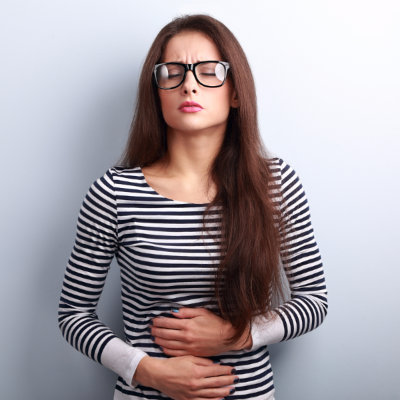 Symptoms of IBS
The signs and symptoms of irritable bowel syndrome can vary widely from person to person and often resemble those of other diseases. Among the most common are:
For most people, IBS is a chronic condition, although there will likely be times when the signs and symptoms are worse and times when they improve or even disappear completely.[3]​
5 Tips to Reduce Tummy Trouble:
​
[1] http://www.medicalnewstoday.com/articles/316165.php
[2] http://www.mayoclinic.org/diseases-conditions/irritable-bowel-syndrome/basics/definition/con-20024578
[3] http://www.mayoclinic.org/diseases-conditions/irritable-bowel-syndrome/basics/symptoms/con-20024578
[4] https://realtruth.org/articles/170223-003.html
[5] http://www.fitnessmagazine.com/health/digestive-system-health/
[6] http://www.ibsdiets.org/fodmap-diet/fodmap-food-list/
[7] http://www.huffingtonpost.com/entry/solving-pooping-problems-without-medication_us_58caf28be4b0537abd956efe

By the way, I have no idea if this is true or not, but I recently heard that Canadians have among the highest rates of IBS in the world. Hmm, I wonder what that's all about??

Posted by Healthy Life Lessons at 5:13 AM