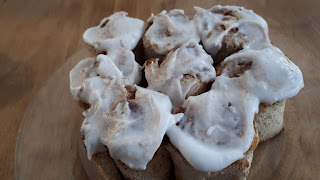 This recipe came about to use up 'party sandwich' bread (flat and crustless) Little A made me buy her. I should have known she wouldn't eat much of it. This has happened before with this bread (and a million other things). She says she wants to make party sandwiches but then we get home and she remembers she hates egg salad, tuna salad, etc., she makes a regular sandwich using it, remembers it's not ideal for that because the fillings tend to fall out, and then she leaves the rest over.

Since I abhor throwing away food, I decided I had to find another use for them and this was a total winner. And it really takes just 15 minutes! You don't need to measure anything. We made them in the toaster oven so you don't even need a real oven to make them.

Spread bread with butter or whatever. Sprinkle liberally with sweetener and cinnamon and roll up tightly and pinching ends so they don't unroll. Cut each one in half or into 3 pieces and place in greased baking dish. Place in oven or toaster oven at 375F for about 7-10 minutes making sure they do not burn. Remove from oven.

Posted by Healthy Life Lessons at 4:46 AM