Probably the most interesting thing for me about visiting Israel is not being a minority for the first time in my life. That being said, I don't necessarily feel I've got a lot in common with ALL Jews. Not being religious, and being extremely socially liberal, I can't say I understand the Hasidic Jews beliefs or way of life at all. But according to our guide, Roni (roni_tours@walla.com), who was fantastic, by the way, most Israelis don't understand them much either. Nevertheless, they have a lot of power in Israel, which is why they don't fight in the Israeli army, and insist on businesses shutting down for Sabbath in Jerusalem.

Of course, the other amazing thing for me was just the ancient history of the place. Coming from a new country like Canada, where any structure over 100 years old is considering 'historical', it was mind boggling to see so many buildings over 2000 years old still standing. If the history interests you, then definitely visit places like Ceasarea, Acco and Old Jerusalem.


Below is a photo of Old Jerusalem I took: 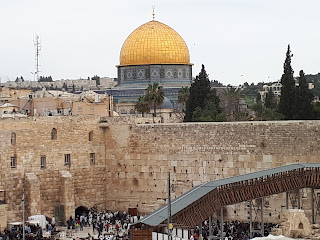 Though Israel is a Jewish country, it is a place considered sacred to many religions including Muslims, Christians and Baha'i. Roni took us to see many of the Christian holy sites in Old Jerusalem, which was fascinating. There were many, many Christians visiting and praying all over the place! He also took us for a brief visit to Haifa, which is the holiest site for the Baha'i.
We also went to the wailing wall, which is where the Jews pray. I stuck a little prayer on a folded up piece of paper into a crevice in the wall, as is tradition, even though I don't pray.

We also went museum mad during our visit. You definitely have to visit some museums if you are in Israel!

The Herzl Museum was a lot more interesting than I thought it would be. Its interactive, so I think even kids age 12+ might enjoy it.  In fact, it had a profound impact on me, especially when Roni told us some personal information about Theodor Herzl. He was the first one to propose the idea of a Jewish state, after witnessing the ongoing anti-semitism in Europe in the 19th century. Sadly, he died in his 40s, long before Israel became a state. Even more tragic, is that none of his 3 children or his grandchild (murdered in the Holocaust) lived to see it. But his remains were eventually moved from Europe to Israel and you can visit his tomb on the grounds of the museum.

If you are interested in archaeology or ancient and/or biblical history, than you definitely have to visit the Israel Museum. As an added bonus, its one of the few places open Fridays and Saturdays in Jerusalem!

If you can stomach it, a visit to Yad Vashem, the Holocaust museum is also a must. It is the best Holocaust museum of have seen yet, even better than the one in Washington, D.C. We were trying to fit in a lot the day we went, so our time there was limited. I think its one of those places you could go many times and still feel like you learn a lot more each time.

Below is a monument honoring Janusz Korczak, a Polish teacher at an orphanage, who refused refuge and went to the gas chambers with his Jewish students. 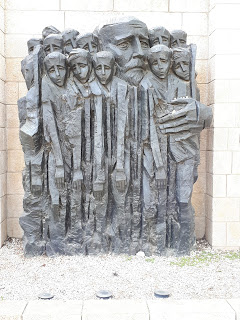 Below is a shot of the Dead Sea. We didn't actually go in it. First of all, it was a bit too cool for outdoor swimming while we were there, but also, we didn't bring bathing suits. 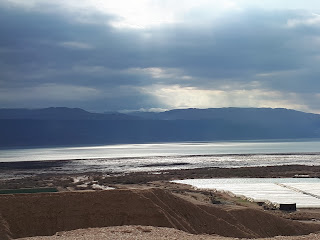 To be honest, though Israel has a lot of natural beauty, that's not what I was really there to see. I wanted to focus on the history and culture.

If you are interested in doing outdoorsy stuff, there is a lot of that too: swimming in the Dead Sea, beautiful beaches, hikes in the desert, etc.

Our guide, Roni, told us he has led tours focusing on the plants and trees in Israel, and bird watching ones too. There are lots of birds!!

Posted by Healthy Life Lessons at 4:42 AM